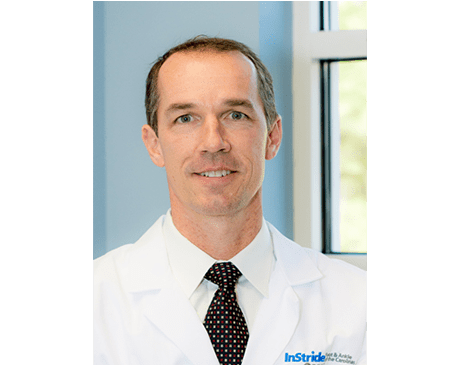 A native of Ohio, Dr. Blaise Woeste is an ABFAS board certified foot surgeon with InStride Foot & Ankle of the Carolinas, a premier podiatry practice with locations in Matthews and Monroe, North Carolina. He has spentmore than two decades of his career focusing on treatment of sports-related foot and ankle injuries, reconstructive foot surgery, and hospital-based diabetic limb salvage as well as treating common podiatry problems including ingrown toenails and plantar warts in both adults and children.

Dr. Woeste and his wife moved to Charlotte in 2000 where they have raised their 4 children in Union County.  As a former collegiate track athlete, he has continued his love for running and sports competing in local 5K races, marathons, and triathlons throughout the Southeast.  Much of his free time is spent coaching his children’s youth teams across the greater Charlotte area.

Dr. Woeste is licensed to practice by the state board in North Carolina. A member of both the American Podiatric Medical Association and the North Carolina Foot & Ankle Society.

“While every patient and their family have unique concerns, I strive to provide the highest standard of care to meet and exceed expectations and achieve the best outcome possible”

CERTIFICATION
American Board of Foot and Ankle Surgery

We accept many more! Kindly call the office, should you have any questions or concerns.